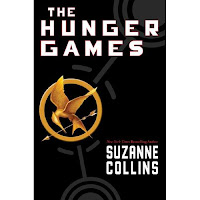 I'd seen many of my students reading this book (or any of its two sequels) and then I discovered there was a film coming. I don't like to see films based on books before I have read the book. So I decided to read the novel as soon as possible. But because it was a "young adult story" I thought it was a good opportunity to read it in English. Young adult stories usually are easy readings, with plain language, simple characters and a fast pace.
Most of the expectations ended up accomplished: it is a book mainly for teenagers, it is thrilling up to some extent, and it is an easy reading.
I don't think it's really important to talk about the plot. The novel is very popular. Anyway, let us say it is placed in a undermined future (like The road, like The Giver). All the twelve districts of a dictatorial society are forced to present every year a young boy and a young girl to the Hunger Games, a competition in which they must fight among themselves, only one can win and all the other must die. These Hunger Games are a tribute, a punishment, but they are also a reality show. This aspect of the novel (a tv show involving the death of participants remembered me of another book, Ácido sulfúrico, by Nothomb).
I don't think I'm going to read the other two books of the series. Let's see the film first. 4/5
Publicado por alfonso en 17:15